My great grandfather, Dr. Andrew Henderson, was an individual who, because of his pioneering spirit, was able to see and experience much in the building of the Canadian West.  Andrew’s story is an interesting one. 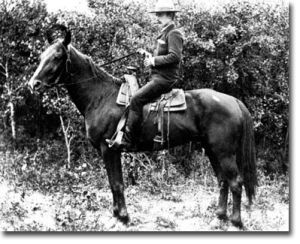 Andrew’s parents, Alexander Henderson and Christian Sutherland had emigrated from Scotland in 1832 and had settled in Sorel, Quebec on the St. Lawrence River.  They had six children: James, Daniel, Alexander, John, Andrew and a sister Elliot.

Andrew had to go to work early to pay for schooling when his father drowned in a shipping accident on Lake Ontario.  The ship, the Tinto, on which Alexander was an engineer, caught fire and sank on July 19, 1856.  Andrew went to school in Montreal and apprenticed in pharmacology and eventually graduated in pharmacy.  His real desire though was to become a doctor so in the early 1870’s he enrolled at McGill University.  In order to pay for his way through university he took up part time work selling medicine for the Lyman Company of Montreal.  His route covered much of Quebec and the Maritimes.  In a 1932 newspaper interview with the Saint John Evening Time-Globe, Henderson recalls visiting Saint John, N.B. in 1874.

I made my triumphal entry into your bustling city by horse and team via the Medapedia route in those good old days of wooden ships and awful roads . . . Selling propriety medicines in those days was not the cinch it is at present.  With roads now like billiard tables and pneumatic tires on high-powered automobiles, it is a pleasure.  We had to jog along over rocks and ruts with trudging horses and clattering iron-rimmed wheels, calling at every country store, village doctor and for that matter, practically at every door.

In 1880 Andrew Henderson graduated from McGill along with Sir William Osler who was to be an intimate friend and confrere throughout Henderson’s life.  Henderson spent two and a half years as assistant and house surgeon in the Montreal General Hospital.

Construction of the Canadian Pacific Railway had begun in May of 1881 and the track was inching its way across Canada and by 1883 had reached the prairie provinces.  Dr. Henderson felt compelled to head west so in 1883 he resigned his position and headed to Calgary.

Left for the North West on April 1883, arriving at the end of the track ten miles from Maple Creek, Saskatchewan en route to Calgary.  The journey from the end of the track to Calgary was made by cayuse in spells, and occupied the following six weeks, fording the Saskatchewan at Medicine Hat and the Bow at Calgary.  I arrived at Calgary on June 8, 1883 and at once located on the east side of the Elbow River near the old Hudson’s Bay Company trading post.

He stayed briefly in the cabin/office of Wolff and McVittie who were the Dominion surveyors for the new town site.  Andrew had left his fiancée in Galt, Ontario.  With a wedding planned in the near future he realized more permanent accommodations were needed.  In July of 1883 he built a house that also served as a drugstore (the first in Calgary) and office.  It was the first framed building erected in Calgary on the east side of the Elbow.  The house was also temporarily used as a pay office for the crews of track-layers and graders employed by Langdon and Shepherd, contractors for that section of the line.

In April of 1884, Dr. Henderson travelled to Galt, Ontario where he married Jane Edith Blain and they returned to Calgary riding in the first caboose to reach Calgary.  A son, Richard Gordon Henderson, was born in 1885, one of the first white children born in Calgary.

At the time, Dr. George A. Kennedy was the surgeon to the North West Mounted Police Division at Fort MacLeod.  When he left for a trip east in May of 1884, Dr. Henderson took over the medical contract for the Calgary division of the police, becoming the first civilian doctor in Calgary.

In 1885, Henderson was appointed to serve as Brigade Surgeon during the Riel Rebellion (Saskatchewan Rebellion) and also as surgeon for the C.P.R. on the division from Medicine Hat to the first crossing of the Columbia River.  He was also asked to care for the Indians of the Blackfoot, Cree and Stoney Reserves.

In 1887, Dr. Henderson was offered the contract with the Great Northern Construction Company for medical services on the construction of the western extension of the St. Paul, Minneapolis and Manitoba Railway.  When that contract was completed he moved his family to St. Paul where he taught clinical medicine at the University of Minnesota.  Dr. Henderson was also the leading physician at Merriam Park where he had his home.  Merriam Park was a model community started in 1885 and was located midway between St. Paul and Minneapolis.  Andrew and Edith’s daughter, Marjorie Sutherland Henderson was born in St. Paul in 1888.

It was during this time that Dr. Henderson befriended Dr. Dwight F. Brooks.  Dr. D. F. Brooks, Anson S. Brooks and M. J. Scanlon were principal executives for Brooks Scanlon Ltd. and Dr. Henderson was asked to be in charge of the hospital at Scanlon, Minnesota.  This company operated a large mill there and also had huge logging and sawmilling operations throughout the American Pacific Northwest and the Southern B.C. coast.  In 1907, as operations started to wane in Scanlon, the company began to focus on British Columbia.

The three partners went to see their logging operations at Stillwater, a camp about 65 miles north-east of Vancouver.  While there, they looked at the potential of building western Canada’s first pulp mill at the near-by site of Powell River where the Michigan and Puget Logging Company was operating.  They bought the property in October of 1909 and formed the Powell River Paper Company.  The mill in Minnesota was closed and Dr. Henderson and the entire operation along with hundreds of construction workers were moved to the Powell River logging camp.  There was initially one Union Steamship boat from Vancouver once a week, about a seven hour trip.

Dr. Henderson took his B.C. Medical examination and then went immediately back to Powell River.  One of the first things Henderson did was to institute the first medical plan in B.C.  One dollar a month was deducted from every workman’s salary which paid for his (but not his family’s) medical needs.

Andrew then set about having his house constructed which was the first home to be finished at the town site.  At the same time he also set up the town’s first hospital, a tent and converted bunkhouse, which opened on June 29, 1910.  It could accommodate eleven patients and had facilities for surgery. 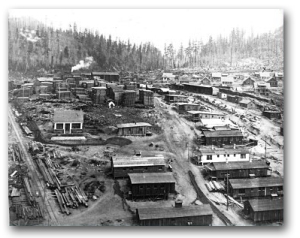 Powell River in 1910. Dr. Henderson’s house is on the left (with white trim). The hospital tent and “bunkhouse” are just to the right of center.

The only time extra room was needed was during a typhoid epidemic in the summer of 1912 when other houses were used for patients.  The epidemic lasted until October resulting in two deaths and thirty-seven cases of typhoid.  Henderson operated out of the tent and “bunkhouse” for over three years until the construction of St. Luke’s Hospital in 1913.  The first staff consisted of Dr. Henderson, his assistant Dr. E. J. Rexford and Miss Grace Hancock, head nurse, cook and orderly.Dr. Henderson was prominent in starting the first school in Powell River.  In 1910, a committee consisting of Dr. Henderson, Mrs. A. M. Oliver and J. P. Keyes got together to make temporary arrangements for schooling.  They were able to arrange for the use of the pool hall for classes. In order to comply with the minimum requirement for school enrolment to acquire school status, Dr. Henderson’s daughter (a college graduate) and a baby were enrolled to fill out the numbers.  A permanent school was established in 1913 and was named Henderson School. Andrew was the “perennial Secretary” of the School Board right up to his death.In July of 1914 Dr. Henderson and Edith travelled across North America and then sailed on the Lusitania for England to attend the Congress of Surgeons in London.  They also intended to visit Paris and Berlin. He was able to take advantage of the time to visit his friend Sir William Osler who was then a professor at Oxford University.  Dr. Henderson’s first meeting of the Congress was interrupted by a “militant Suffragette.” He later went to the British Museum and the Tait Gallery where…. . . all women had to be accompanied by a male who signed a paper, taking responsibility for the woman’s actions.  This was due to damage caused by women suffragettes in the two galleries.On August 4th, 1914 Andrew stood on Westminster Bridge at midnight, when the clock was striking the hour and I knew that the war was on, a war that would stagger humanity and shake the greater part of Europe to it’s foundations.

With the start of the war it was no longer possible to travel to the Continent so Andrew and Edith toured around England.  They left England for Powell River in September, their ship escorted part way by naval ships.

In 1918 Powell River was hit with the Spanish flu epidemic in which nine people died.

Drs. Henderson & Marlatt performed miracles, and how they kept going is the greatest miracle of them all . . . Dr. Henderson was Health Officer at the time and took hold of the town with a firm hand at the height of the epidemic.  Everyone was compelled to wear gauze masks over the mouth and nose when on the street or when likely to come in contact with other people.  These masks were frequently sprayed with Lysol to discourage the ‘flu germs . . . eventually the epidemic petered out and we were left with the memories of the most tragic period in our history.  I remember the deaths, I remember the trying conditions under which we laboured and the intense fear of many people.  But my outstanding memory is the great service rendered to the people and the unselfish devotion to duty of Dr. Henderson and my good friend Dr. Marlatt.  (Arthur C. Dunn)

Dr. Henderson with his first car – a Buick

In 1920 Andrew retired from practice but became the Hospital Administrator at St. Luke’s Hospital. He also was Powell River’s Coroner and Public Health Inspector.

In January of 1929 Dr. Henderson’s wife Edith died of complications arising from a fall while crossing a street in Vancouver. In March, Andrew suffered another loss when his son Richard died of a heart attack at the age of 42 while living in Vancouver.

In 1930 Dr. Henderson was honoured by his fellow McGill graduates for fifty years of continuous practice. The Vancouver McGill Alumni Association presented Andrew with a portrait of himself painted by Mr. Victor Long. He also received tributes from representatives of medical alumni of other Canadian universities across Canada.

Dr. Henderson died on September 19, 1935 at the age of 83 in St. Paul’s Hospital in Vancouver survived by his daughter Marjorie, my grandmother.

The Homestead on the Plains

The many adventures of a first time homesteader

Life on the Celtic Fringe

Writer on the Edge

Homemade and Homeraised is what we strive for.

The good life. Gardening in Eden.

Life as I see it

A collection of beautiful things and thoughts

Simple Living for families that is easy and eco-friendly

A spotlight on nature and the outdoors, blurring the lines between photography and art

The place of Nature in the 'ordinary' Spiritual Life through Meditation using Macro Photography to illustrate.